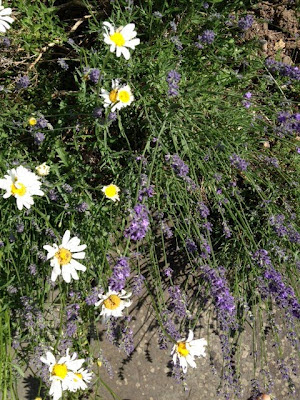 Thinking about independence and freedom as I prepare for the Fourth of July. I see the historical importance of this nation claiming its separation from the British governmental structures and priorities. Yet even that separation seems an illusion to me, as does the independence that is so highly touted today. In our country's politics there is much argument and vitriol over what people imagine to be their independence, a confusion of independence with the desire to be in control, and conflating freedom with a choice of actions.

When we put a plant in the ground we expect the roots to spread and open into the dirt seeking nutrients and moisture for its survival. The plant grows as a separate entity yet must have rain, sun, the balancing of night and day, and many other conditions in order to thrive. This is no surprise to anyone, and in this example it is easier to see that everything is co-arising. The plant's life relies upon the oceans and the evaporation that brings the rain, the wind that carries the clouds as well as the rivers that bring the water down stream, the particles in the soil absorbing the detritus of rotting tree limbs, the heat of the sun transforming the chlorophyll, the enzymes, weeds and bees, the whole connecting network of interlaced parts. We can see the plant as a separate piece and as part of the whole, but we know that it cannot exist as a separate form.

I think it is amazing that we so easily think that I am independent if I pay my own rent, put water in the tea kettle, put it on the stove and turn on the gas to boil it for my own tea or coffee; that my choices of which tea or what coffee beans represents freedom. The water from the faucet ties me to the rain, clouds and ocean, all the engineers and fabricators who put the pipes together(and their parents, teachers and friends), the workers and ancient cultures that figured out the filtration mechanisms and all of that. This line of thinking puts me inextricably in a web both ancient and immediate.

There is such confusion about freedom. In every moment there is a deep freedom, unaffected by conditions. It relies upon the view, the viewer, and awareness. This is not to be confused with an ability to willfully choose according to one's desires or having the possibility of controlling outcomes. Freedom in any moment (THIS moment) enables the experience of total interconnectedness, that awareness of co-arising, and escape from the dictates of conditional nature. We can drop the dualities - and shift the focus of our gaze to a much wider way of seeing, even with a very acute focus.

Even one moment of this freedom is liberating. The responsibility then follows to honor one's place in the scheme of things, offering the gifts we have, doing what we can to see the truth rather than what we want to see, and take actions that do less harm. It still feels good to handle one's own affairs - the rent, the tea selection etc. but it can actually be quite comforting to understand that we are, in fact, not independent, not separate. Even the pain of parting (divorce, immigration or death) is a little softer with this deeper view.

Time is on your side in this one 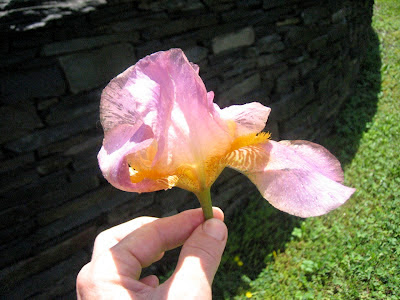 After the rain cleared this afternoon I walked the lawnmower back and forth across the length, the slope, the width and the curving sides of the large swath of grass we keep short in the midst of the wild fields and woods upstate. As I walked, I noticed my breathing become more textured on the uphills, softer on the downs. I glance at the plantings, the trees, look out for toads or bees in the grass, and take note of the way things are after all the rain we've had lately. We recently divided and replanted a great many of our irises and lilies in order to remove an invasive ground cover and to give each of these beautiful flowering stalks more air and light. Of all these iris almost none have bloomed in this, their special moment. I checked out the few blooming on short stalks and kept walking. Last year that bed was a jaw-dropping mass of beauty. This year there are short leaf spears grass-like leaves, constant weeding, and no blooms to speak of. The jury is still out on the lilies, whose time is not yet, but they look young and undeveloped compared to those we did not disturb.

It can take several seasons for a plant to build the stamina and connection to the earth that it needs to send out those miraculous blooms that thrill us. Even after developing a thick and luscious clump of stalks full of buds, those stalks can be chomped by a deer, or broken by the weight of the rain on the first open petals. Yet the roots and leaves continue to do their part to repair and rebuild, to continue the trajectory and after a dormant winter, will try again for the blooms that help create their seeds. Even lilies and iris that spread primarily by their roots are driven to produce those stark and beautiful seed pods that shake out their dried seeds in the winter winds. It is even more dramatic with the little seeds I planted in the vegetable garden that start with just two fragile leaves, then begin to send up the leaves that are characteristic of their species. It takes all season for some to flower, fruit and ripen, where some produce delicious edible leaves almost right away.

So too with a yoga practice. Even if you were once a magnificent blooming clump, when you start to establish a new practice, it takes time. The seeds you plant are of all types - those that produce something right away and those that may take years to evolve into where they are those eloquent blooms. With yoga, time is always on your side. No matter what your age or your original set of conditions, the practice picks up right there and no matter what the external conditions might be, there are ways to continue growth and deepen your practice. Perhaps the joy of seeing those small immature clumps of not-quite-ready-to-bloom iris is what I feel every time I approach my practice. These moments on the mat, like those short green shoots, are full of possibilities and part of the process of realizing who I am.
Posted by Sarah at 5:55 PM No comments: 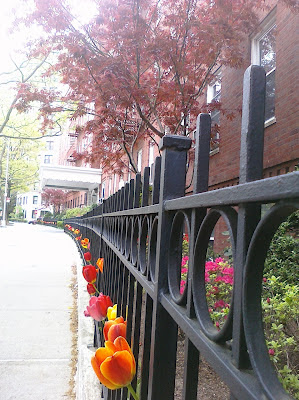 It is nearly impossible to ignore the sparkle of doing more, the allure of the challenge in the physical asana, or the hierarchy of yoga classes and practices deemed a "higher level." We all see yoga in the external images, those crowning aspects of back bends and inversions that seem so graceful yet unapproachable to so many of us. Without exception, we can find ourselves in classes with bodies that seem more able than our own, or at the very least, we know of such classes labeled "advanced." Is this how we deepen our practice, inspired and driven beyond our current limitations? If not for setting a goal of building strength, or gaining flexibility, or holding steady through that moment when we want to give up, how else do we get beyond feeling weak, inept and unsure of ourselves?

The way I see it, the very first commitment we make to our practice is a step beyond this allure of escalation. Embedded in that first commitment is an inkling of non-dualistic thinking: that even with our flaws and weaknesses, strengths and proclivities, we can experience the truth of this moment and release our judging mind into the role of observer/witness. Even as we struggle in the first moments of a meditative centering, even as we worry about our tight hamstrings in a forward fold or weak abdominal muscles or sore wrists or tight lower back or whatever it is, we can begin to see it as it is and with a focus on this inhale and exhale we can allow ourself the experience of observing as our own awareness begins to broaden. This is the heart of practice at any stage, after any number of years. If you began the practice as an accomplished athlete in perfect physical form, you would still run right up against this greatest challenge: to be fully present in a broadened perception with a focus of awareness in this moment.

And so it is that I find myself too, right in the middle of standing on my head, and up until a specific moment, my energy is flowing freely and I am observing an array of sensations, including an openness and startling ease. Then, in an instant, my attention turns entirely to counting my breaths, and my mind establishes a goal -- that number of breaths that would put me in the "I DID IT" category. My experience of the moment is hijacked into holding on tight, counting my breaths and encouraging myself to just keep going until I reach that magic number that I've set myself. I hold on for that accomplishment and when I do release from the posture, I pause, observing the flow of energy in response to the asana, the sweep of the experience and my breath in that moment.

Is it any surprise that my practice was to see the grasping at the goal, after experiencing a new level of openness in the asana? Not at all. This is the essence of the practice itself, declining the invitation to escalate into a physical competition, inviting the increase in awareness of what is actually happening, and as always, seeing the dualistic way of thinking/being and not getting lost there. The significance in the number of breaths I remained in headstand is indeed in the experience of that gripping, my fear reaction to the openness in the pose, that by its very nature challenged everything about the status quo of my conditioned ways of seeing myself in the world. So much benefit in perceiving the choices of where we turn our attention! So much freedom comes in those choices!
Posted by Sarah at 11:58 AM No comments: