State of the Union: knitting and purling 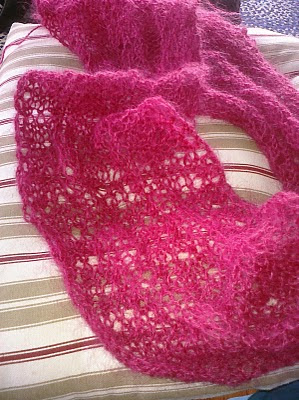 When I began knitting again I couldn't remember how to even get stitches onto the needles. Then I began looking at all these awesome patterns and thought perhaps at this stage in my development I might have cultivated sufficient attention and patience to try making something that requires attention and patience. I was surprised to find that some of the most intricate looking patterns are actually the very same simple stitches that I have known since high school days... the basic knit and basic purl stitches. It is how they are used, dispersed, slipped, knit together and so forth in patterns that might just be two or four rows, but could be as elaborate as 16 row patterns... Well, it just amazed me that so much variety, beauty and usefulness could come from such simple stitches used with intelligence and diligence.

Last night as I listened to the State of the Union speech, I was reminded of this idea of how basic stitches can be used so variously. It depends upon the skill of the hands holding the yarn, the appropriateness of the attention to the level of difficulty in the pattern itself, and the willingness to focus fully -- yes, even tearing out what has been done to get to the mistakes, figure out what happened, and, while still maintaining an even temper, continue on in the pattern.

In my estimation, our current president is keeping just such a steady hand on the yarn. He was handed a terrible tangled snarl and a very complex pattern two years ago. There was much to untangle, much attention required to see and then re-establish the pattern chosen by the election that put the needles in his hands. Now he is seeing the pattern emerging and can go back to clean up a few missed stitches, while beginning to add the shape required for this new stage in the work. He can change the lighting to see better, and he has asked for help in spinning the yarn he needs, but his hands remain steady throughout.

I say steady hands and focused attention will continue to create a thing of beauty -- resilient, useful, and adaptable to the changing climate. Each will have their chance in turn to take the yarn, but not many can see the pattern in the tangled knots. Lucky we have such a one just now.
Posted by Sarah at 12:03 PM