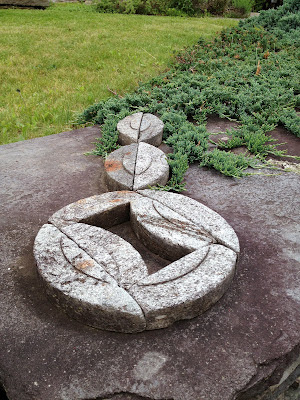 No one talked about money when I was a kid growing up. In truth, our family just made ends meet on the salary of my dad's job as a meteorologist/government scientist while my mom tried to keep painting with 3 small complicated kids. I didn't have much stuff and wasn't involved with spending money or managing it within the family. Oh well I did get my ten cent weekly allowance to help me learn about money, and saved all but a few pennies and opened a savings account in a local bank just as I was expected to do. That bank that actually went bankrupt when I was about 10 or 11, and they didn't have Federal Deposit Insurance so I lost the sum total of my childhood wealth - $25 as I recall. The pennies I spent went to penny candy, the memory of which remains as I can feel it right now, as though standing in front of the array of boxes and jars: this one 2 for a penny, these 5 for a penny, these 2 pennies each. Knowing that whatever I chose would be candy, knowing that I could only have as many as my 5 pennies would buy, these were the parameters within which I considered packaging, shapes, quantities, and flavors. If my older siblings were along, which one or both invariably were because I was not allowed to walk that far from home without them, there was influence according to their tastes and their ideas of "value." More for the money seemed crucial to them, where I, 5 years younger, didn't always feel that way.

Over time, I was progressively more responsible for myself financially until I was through college, paying my way with summer jobs and part time work, sharing apartments with others, and eventually selling my day times and life effort for one salary or another. As it turned out, my husband was much the same, and we joined forces with a small savings account and frugal habits of home cooking and a tendency to the cheap entertainment of walking around town, foraging in second hand record and book stores and cooking and eating with friends. Then children, then elderly parents, then managing financial affairs for my elders, then losing my parents and inheriting some of those same resources that I had so carefully managed for them.

As I stand at the edge of the asparagus bed with the hose pulled out to nearly its longest extension, I watch the drops fall onto the dry earth. I carefully soak each patch of this rectangle and move the cascade of water to the next section to give the earth time to soak up the moisture before returning to that place a second or third time. Asparagus roots grow from at least a foot deep and spread the crowns in a network close to the surface. Watering the surface is not enough to support the plant, and evaporates in the day's heat.

Broadening my view, I see the edges of the asparagus bed, our cultivated blueberries on one side and the wild raspberries on the other. A bird flits through my range of vision and awakens the realization that I am also perceiving the myriad sounds of birds, the hungry nestlings in the bushes beyond the raspberries. The opening of the downward slope glows in the bright sun, though I stand in the shade of what I know to be a birch tree behind me. I hear its leaves overhead in the breeze. Further behind me is the gravel drive (baking in the sun), the lilies, the wild grass, the road, trees, field, rocky ledge, hill, sky, onward towards where the sun rises and the moon too. I shift the hose to the next dry patch, keeping the center of my focus on soaking the new spears emerging from the bed, and encouraging the roots of the fernlike greens of the spears too thin to pick that have gone on to flower and seed. The muted hills across the valley are like dreams in a ring around me.

Staying focused on what I am actually doing, I am learning to allow my awareness to include what else is also present beyond my own action. What a shift this is from self absorption! In this way I am trying to manage my new condition of having family money that in some ways still feels unreal to me. I've invested most of the money in hopes of providing for a time of life when my husband and I will not be required to trade our time for money. I find that my generosity can express itself in new ways beyond what I can do with my own hands, presence or words, helping others with projects that require funds up front in order to keep on with their missions of building joy and possibility for others. Part of me knows that all I will ever have is living with my choices and offering possibilities to others. How much money changes this is yet to be seen. The biggest change is to offer my husband the possibility that he does not have to continue to earn more money to ensure our future financial safety, which is all an illusion anyway, but which definitely feels more secure with more resources. This is a a huge consequence of our frugal saving, and now the addition of generational savings.

When the asparagus grows too tall, it loses its sweet succulence. I cut it anyway, for the health of the bed, and make broth from the inedible (at least for me) stalks. This is also not something I learned as a child, where we never had a vegetable garden, nor did my mother enjoy cooking (though she loved to eat beautiful fresh foods). My parents were basically first generation of immigrant parents who were not farmers but intellectuals and tradespeople. Probably their grandmothers (or their neighbors) had small kitchen gardens, but that was not what came to America with the next generation. There was an emphasis on intellectual pursuit and freedom of expression, not surprising given the oppression, segregation and limitations set on them from whence they came. There was one branch of cousins that experimented with farm life, attempting to take on agriculture and social structures in the Midwest in the early 20th Century. Mostly it resulted in advanced degrees in scientific fields among the offspring of that clan.

So I stand at the edge of the asparagus bed, feeling sure that the money in the retirement account will be subject to the vagaries of our political and cultural unrest. I am just as sure that the heritage of my ancestors in some way showers down upon the asparagus crowns deep in the earth as I shift my hose onto this quadrant for the third time. The weather has been so hot and dry (blazing wild exuberance and despair in fires out West); the sweet crispness of the raw asparagus is startling and deeply moving. Perhaps the idea of independence is turning away from control towards the freedom to broaden awareness and take in a fuller view. It is this vision that I wish for the people living now. This is their only moment to be awake.
Posted by Sarah at 11:19 AM