Stuck on the Details

Irritation lives in the details. Admiration can also. Mostly it seems humans vacillate between micromanaging and the gross motor equivalent of emotional responses. It is that tiny splinter, or those dirty dishes in the sink, or that little chocolate on your pillow that triggers the focal point, but then the whole system kicks into gear around it. 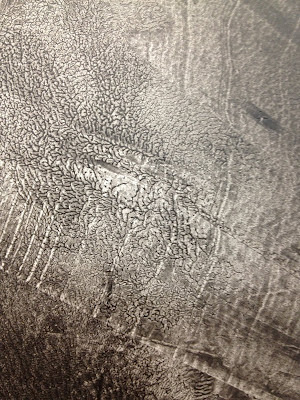 I love this image because for me it is nothing and everything all at once. It doesn't represent any thing, yet is directly derived from something specific. It evokes many emotional and visual possibilities for me, yet remains undefined in purpose, place or object. It is actually a close up of a painting by Jeff Zilm that I saw at a recent art opening in Brooklyn. I'd never heard of him, having gone to the show to support a young artist I've been following since he was in undergraduate studies with my son. Amid the roar and heat of that boisterous opening crowd, the first thing that caught me like a spider in a web, was this quiet intricate flat work. From there, from this morsel, I was able to open to the other works, the dense noisy crowd, the artists and their brave show of art in the world: Detail as diving platform.

In yoga teaching it falls to me to cover minutiae and grand scale, to introduce the whole body-mind interaction of balance by drawing your awareness to the weight in your heel, for example. Yet I will warn you away from thinking too much about that heel, from getting stuck on the formula of sticking to that detail, and advise you to notice occasionally to feel your weight in your feet, to feel your feet on the earth (okay, really the floor). Broadening that out into how you notice this foundational support and your relationship to it, and when you notice that, developing your awareness of this interplay can shift the way you operate in daily life. Now that's a very big picture.

The idea of single pointed focus is a way of training the mind, not so much to see that specific detail to the exclusion of everything else, but really to enable the honing of attention without blocking everything else out. Noticing that you do or don't feel weight in your heel can help you develop a more complete sense of balance and understand what might be happening with your body's alignment to set you off balance. This can lead fairly quickly to discoveries of all kinds. Taking this into a different context, what would happen if the next time someone irritated or disappointed you, you could see that act clearly in a broad context. If you could hold that focus and be aware of the larger sense of that individual person, the structure of the situation, what you brought to it with your own expectations, the set up of the scene that put the two of you where you are now, the background and history of that relationship, and an idea of the potential for growth and sharing that exists in that moment ... well, you get the idea. It reduces the likelihood of a knee-jerk reaction, and lessens the interest in grasping at that detail, providing a different kind of opening for both of you to respond. Perhaps the insight of what you expected in the first place will give a view of yourself, and a relationship of how that person attempted to express themselves or meet your needs will begin to emerge. Perhaps an insight into the history of your reaction will enable a shift from what you thought to what is actually so.

Does it matter whether you feel your weight in your heel? Stand up and play with that for a minute, focusing on it as the center of an endless concentric field of experience and awareness. Well, that's you being here, using the detail, but not stuck on it.

The Fourth of July brings this idea into a new realm for me. It is awesome that many years ago several groups of settlers decided to hash out enough details to come up with a grand plan for functioning as separate and uniquely equal parts in a common structure for a greater common good. The details can be argued, and we know that many human and other beings were left out of this idea of equality and security. In fact, the majority of human beings living in this land at that time were left out. Women, children, native people and people from other parts of the world who were not directly descended (and even some who were) from the Western European male lineage were not included as sharing equally, but as property or less than human, accorded varying levels of disrespect for health and wellbeing. It has been a long time of working beyond some of those details, and using the framework established in those days has been both a benefit and a detriment.

So I celebrate with a focus on the central core of goodness and possibility in that action, actively working to see the fullest array of what we have here in this country without attaching judgment to it, and hope for growth in our global and individual view of humans on earth. It is not always easy to get beyond sorting out where I feel the weight in my own feet, and surely that awareness of balance must come first, but I do have hope for balance beyond that.